This month's offering centres around a I letter we received from Paul Landels and Pete Lewis concerning Newbridge, a one time thriving circuit just outside Leicester. Although we feel that our sport is strong enough now to cope with future evolution sensibly and with an eye for the pitfalls and perils, it is still a letter that deserves to be both published and read by all. lt serves as a timely reminder that we all have an obligation to the sport that gives us so much enjoyment to return just a small amount of that enjoyment as serious commitment


Newbridge - How sad the sight.


Some of us, the older ones, know well the Newbridge of old, some of us may well have started our interest in the sport there. No doubt there are some of you who haven't a clue what l'm talking about!! This article is intended to rekindle fond memories of those who knew it and loved it, inform those who have never been there and perhaps in a small way warn everyone in the sport of the dangers and future you have if you do not strive to strengthen the sport by introducing fresh blood and interest. The early days


The Newbridge track could be found to the west of Leicester, out on the A47 then right onto the 85360 heading for Kirby Muxloe and Desford. At the Ratby/Groby sign turn right and right again after 100 yards down into an old railway cutting, behind a concrete factory. The land was purchased by Wes Rayner and his parents (Mardave) and work started on the track in 1970. Help was given by some of the greats of the sport; Keith Plested, Ted Longshaw and Tom Martin, to name but a few. The track, built in concrete, was completed in 1971, including covered pits and a toilet, to become the first purpose built track in the U.K. The first race took place over Easter of that year and was won by Ted Longshaw. Entry fee was  £2, thought to be very high for the day! Mardave cars were dominant for the first few years, until others were developed. Engine power probably being provided by the incredibly powerful Veco 19. You will notice that a hill was built into the track, an original idea that was to provide a difficult obstacle for drivers not used to such things. To my best knowledge it was the only track to have this feature and together with banked corners was designed to look like a full size circuit. Track length was approx. 120 yards, but would have been bigger had the club had more space to work with. Club membership and the hobby expanded.


By 1977, when I joined the club, membership was down to a nucleus of about five people. Things started to improve due to good work by the P.R.O. and increased awareness of the hobby promoted by Mardave, the local model shops and the occasional local newspaper article. Safety improvements were carried out during the next couple of years as the occasional car, that didn't 'handle the hill' broke loose into the pit area. Tremendous team spirit and a good social atmosphere was built up in the club. I put this down to the drinking sessions everyFriday night at the local pub!! By 1979 the Midlands clubs formed the 'East Midlands League'. Newbridge, Boston, Scunthorpe and Lilford formed the nucleus, later to be joined by Tibshelf, West Burton and Wombwell. The idea being to hold a race meeting at every track and promote competition for the average club driver. This was very successful and soon afterwards the southern clubs formed the 'Southern League' on a very similar basis. To be competitive in this era you had to have a P.B. International, S.G., or a Serpent and throw your Super Tigre out and buy an O.P.S., preferably fitted with a D.P. (Dave Preston) carburettor. Oh yes, and by 1981, a differential was needed. Expenditure was on the increase' The track record was set this year by Kevin Eridgewater. 30 laps in 5 minutes (no complex seconds yet), that's 10 seconds a lap!1, driving an O.P.S./S.G. Most of us thought that someone pressed the lap counter button on extra time. When Kevin's engine was retired the piston was polished and made into a neck chain - Are you still wearing it Kevin? To address the problem of expense the first of the short lived 'Formula 8120' meetings was held at Newbridge. This class was for cars with no differential, flat chassis {suspension cars were now on the scene), an engine with a f50 limit and a limited range of tyres (dyed blue for identification). Unfortunately this class never really took off. Expenditure still increased.


The club fell into decline, no B.R.C.A. meetings could be held due to the speed of the new cars/ the Council slapped rates on the track and the club finally disbanded in 1982, the last few remaining drivers joining either Tibshelf or Lilford. The track was sold off to a private buyer in 1983 for a place to park his stock cars (full size). Alan Blakeman was trying to start a co-operative and promote the track for electric, stock cars, off road, rallycross and 7ath. The new owner proved difficult to find and unfortunately the idea never got off the ground. I happened to be in the Leicester area in early December of last year. To my horror, the track has been torn up and the land is now being used as a gypsy camp. Approaching this via a farmer's field, camera in hand, I was spotted by a couple of men working at one end. I asked if I could take some photos-this was unpolitely declined and I was nearly thrown off. After showing them the photos of 1978 I was allowed to take a small handful of photos purely for my personal album. The angle of the shots was very strictly controlled!! I then proceeded to leave the area at great speed' Basically, I ran like b....y h....1! What a sad ending.


I hope that the powers that be and you yourselves can draw your own conclusions from this sad story and photographs. My ideas, for what they are worth are to work harder at promoting the local clubs and affording a friendly environment to new members who can race, compete, and enjoy the hobby at a cost effective level. lT CAN BE DONE, l'm off to fly RiC Pylon racers now so final thanks to Radio Race Car for their excellent coverage of the sport, my friend, pitman and photographer Pete Lervis (who I met through the sport) and to all those people, too many to mention, in the Newbridge, Carlisle, Southampton and other clubs who helped me enjoy m'7self tremendously over the last 10 years. Finally, for those of you that are still convinced that this sort of thing can't and won't happen again these photographs are of Carnoux, a circuit once claimed to have had tens of thousands of pounds lavished on it. These photographs were taken four years after the Carnoux circuit hosted the World Championships ! The writing on the wall applies to us all, two examples of 1/e circuits have been shown in this report, it could quite easily apply to off road tracks. You have been warned ! 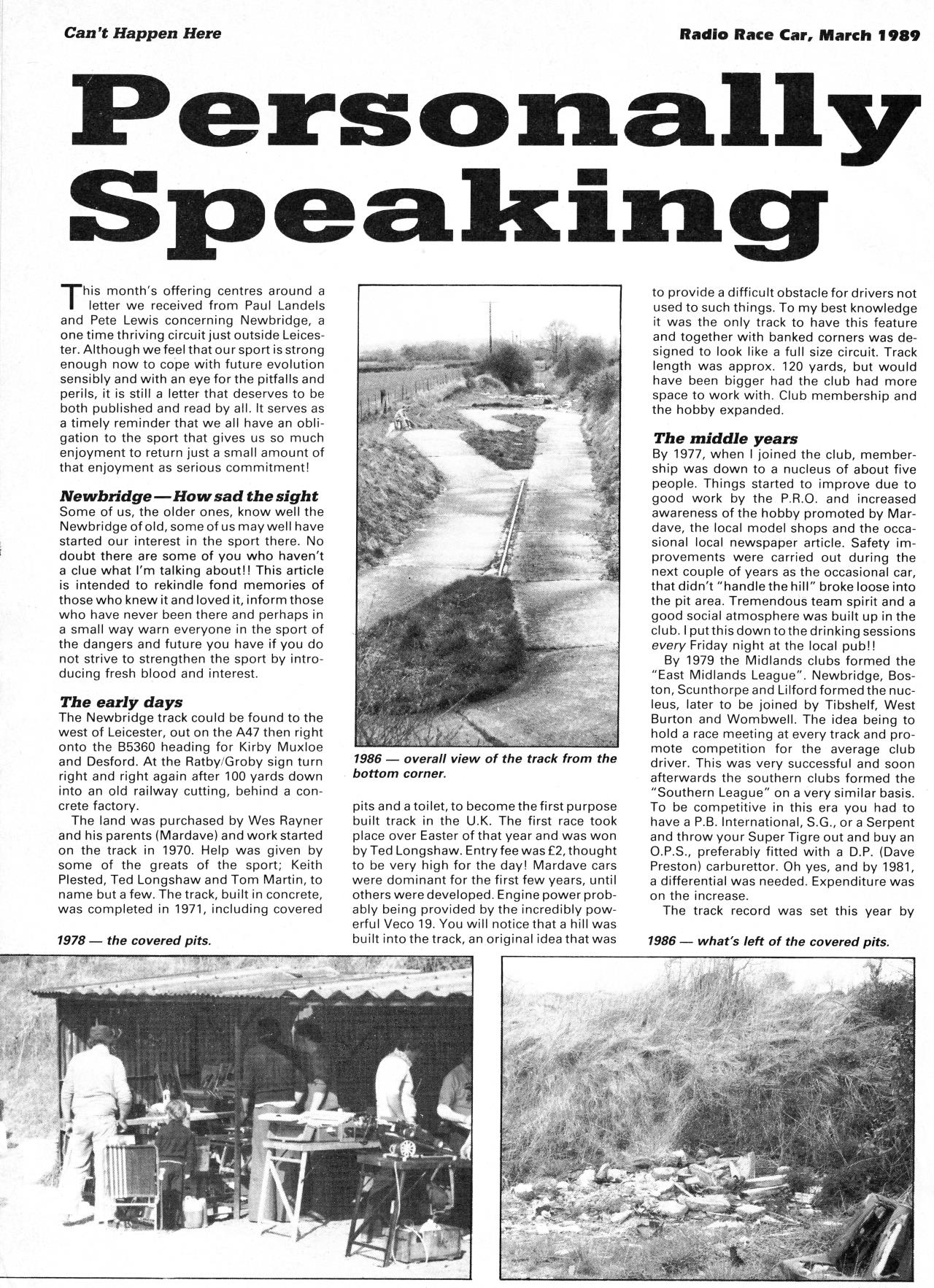 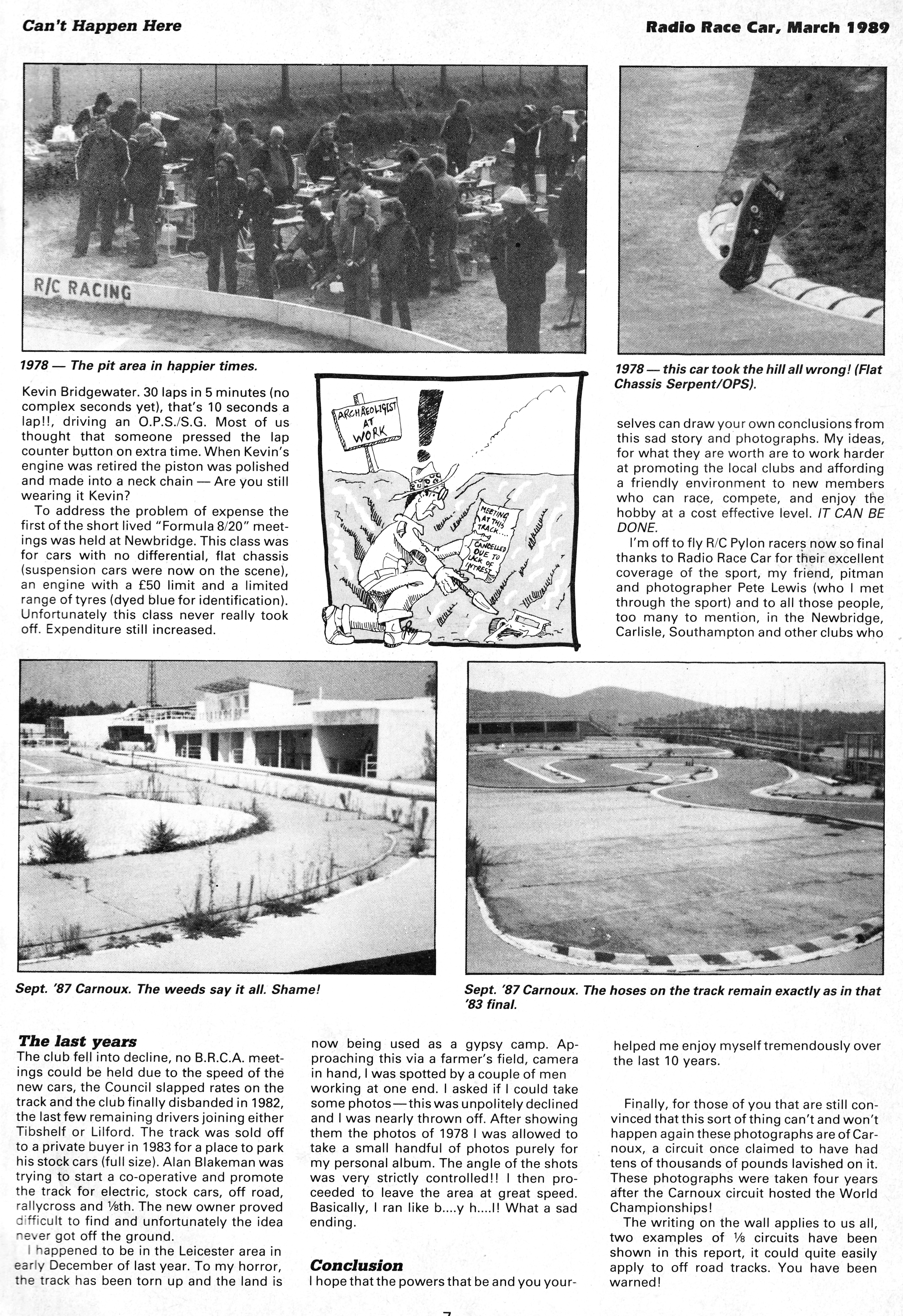