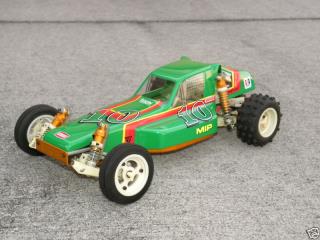 Hi my name is Paul, I got my first car a Rough Rider in 1980, a car that my cousin built me from his spare parts. I started racing a few years later at the club my cousin ran. The first car i raced was a 1/12 scale car like an RC12. Then i had a Boomerang for a few years, this was great fun. Later upgrading to a Kyosho Salute. In between these two I also tried an original Assosiated RC10 which was a fast car but i prefered 4wd. Then i had a Kyosho Optima Mid Turbo, later switching to a Schumacher Cat XLS. But when the Avante was released in 1988 i had to have one. This is my all time favourite car and i raced this for a few years until i passed my driving test in 1990. I sold all of my cars and equipment, which i regret to this day. In 2000 i bought an HPI Sport 2 with the view to racing again. What had happened to all the Buggys in the ten years i had been away from the hobby. This was followed by a Schumacher Fireblade Evo. Then work commitments stopped me from racing again. Then in 2004 i discovered ebay and Tamiya car collecting. I now just collect Tamiya and enjoy my models just for fun and not racing anymore. My goal would be to collect the Avante series of cars and a few more monster trucks. I enjoy restoring cars and have a few projects on the go at the moment. My current cars are; Wild Willy 2 Metallic Special, Bush Devil, Twin Detonator, Midnight Pumpkin, Fire Dragon, Avante 2001, Gravel Hound, Rising Storm, Avante 2001 QD, Scumacher Fireblade Evo, HPI Pro 2 & Sport 2 and growing.