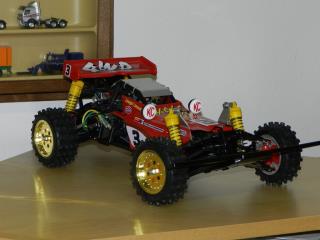 Hi there!
I was born in 1972 and since my childhood model cars are my hobby. My first model was the Boomerang which I got in 86. Unfortunately the orignal did not survive...but luckily I could have my hands on two Boomerang again. After several years of silence, in 1994 I discovered Tamiya again and collecting vintage Tamiya models since then. As of now I have more than 50, most vintage and collectable Tamiya models and still increasing. I am not only collecting display models but also have a lot of vintage runners which I love to run from time to time. //////////////////////////////////

Update:
After my wife and me moved into our new house in 2002 I had plenty of room now for my hobby, but no time. In 2004 our daughter was born and so my free time was limited to almost zero. Two years later our son was born wich made me deside to sell off most of my collection (about 60 vintage cars). In 2007 I tried a restart into that wonderful hobby again, but realised it was to early. Now, in the end of 2008 I could slowly restart and now I am having again some nice vintage Projects running and time is getting better and better. Let's see if I will again reach a collection I had once...