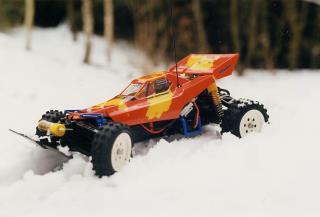 Got into the hobby in 1987 with a Boomerang. Later followed a Kyosho Ultima, then several Formula cars, a Vanquish, the MadCap, KingCab and finally a Top-Force. In 1993 I stopped racing, put the cars on the shelf and went into computers.

But... some viruses never die! In 2000 I bought a HPI SuperNitro and looked around on the net for some informations about RCCars. I found a lot of pages about my old favorites and the fire was back! Since then I'm into collecting and my treasury of RC contents now over 75 cars from Tamiya, Marui, Nichimo or Futaba. And I want more... being nuts is neat!
:-)