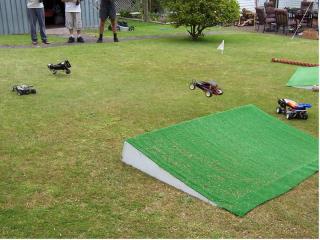 When I was still at school I had many Tamiya kits, like a Clod, Hornet, Grasshopper, Nissan King Cab, Thunder Shot etc... - just not all at the same time. Then, more than fifteen years later I was introduced to collecting Tamiya's - starting with a Hornet, & its become a bit of an obsession.
Until the birth of child no. 1, I was racing several classes of both on-road & off road electric cars, & have a growing collection of Tamiya runners, & have even had a low key Tamiya 'race meeting' in the backyard complete with astro turf covered jumps.