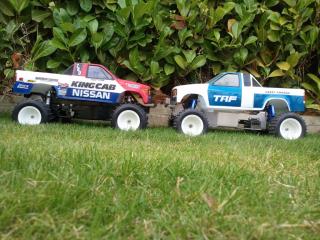 After getting a Fire Dragon for christmas when I was 12 in 1990 I loved building it, racing it and fixing it. A year or two later I finally got the money together to buy a King Cab, after a while stuck a Dynatech motor in it and was amazed by the speed, none of my mates could touch it. I used to look at pictures of the egress which was the closest I got to having one !! A few years have passed and after looking at this site and Ebay its given me an urge to build some of these cars again, I'm only intrested in the Tamiya's from around late 80s early 90s, with kingcab/firedragon/Egress/Super Astute/monsterbeetle being my current wish list.