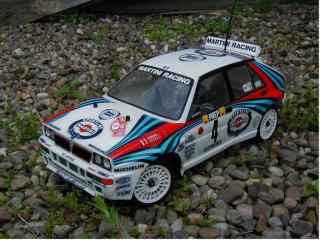 Yearned for a HiLux (58028) when they were new but just couldnt afford it so settled for a Superchamp (58034) instead. I can still vividly remember building it. (nostalgic sigh). Always, always wanted the hilux chassis, I'm more into a more 'scale' and realistic RC (Hence Tamiya) so dont ask me why I got the Superchamp - I think being a higher end model at the time. I would also run it with a Sand Scorcher body sometimes so I had a good chassis and 'realistic' and recognisable body more to my taste.
When eventually it 'died' had some cheap n cheerful s/h things like hotshots etc. just to have R/C cars but then had to give it a rest for things like wife and kids etc.
About 8 years ago gave in to a complete but well used Blazing Blazer (58029), not a hilux but near enough (and cheap enough), sods law - somewhere along the line the front axle got broken and restoration/conversion to Hilux was too expensive (according to the wife), so its remained in bits since.
Cant remember when it was but at one point I had a Bruiser (58048) on special order. They werent available in this country by this time, but still available in Japan (apparently). Five months later there was still no sign of it, an ETA or even confirmation that it had ever left Japan (Hmmm) so I cancelled that and got a Pajero Metaltop (58132). I very nearly got a Castrol Celica (58129) instead, it was a toss up between the two, my interest being rally cars and scale 4x4's like the pajero.
Ran the Pajero for quite a while till getting bits was too difficult and expensive, it was on its 3rd chassis when it 'retired'.
It was fully ballraced and I modded the chassis for wading through water etc up to the windows. Built a large off road course at the end of the garden for it and used to run it in the woods.
Just getting back into it again after another 'time out'. This time I'm looking at rally cars. Got a Lancia Delta on a TT-01 chassis off ebay (58342). Probably paid way over the odds, but if it gets me back 'on the road', who cares.
Perhaps one day I'll get the pajero and blazer going again. I've always kept them just in case, but if the rally car things works out ... who knows.

Well, been busy. My 2 kids also seem to love RC cars. (2 girls aged 13 and 6). Since getting the Lancia they seem to be into it as much as me! The Lancia is pretty fast though on a 17x2 motor (bear in mind I'm used to the more sedate trial/rock crawling type RC) so I got the youngest one a mini cooper 'toy' car from Toys 'R' Us - the massive one 'bout 24'' long with lights and sound, and the oldest one a TL-01 based Mitsubishi Evo from ebay.

Also bought a new WRC Escort (58324) for the oldest daughter and loads of Hop-ups as she wants more speed now. We have yet to build it, but the longer we wait the more Hop-ups seem to appear for it.

The youngest girls mini got given away (*'*@!!) without me knowing so I decided on a Vanessa's Lunchbox to replace it. We built it together and I put a 55T Lathe motor in it to keep it more managable (and longer lasting) for her.

Through the power of ebay, have also been stocking up on tyres, wheels and parts in general. Will be updating showrooms when I get time..

Got a new Hilux High-Lift from fellow member RyanBored, still working on that. Like everything else, its 'work in progress'

Wonder if I'll ever finish anything?