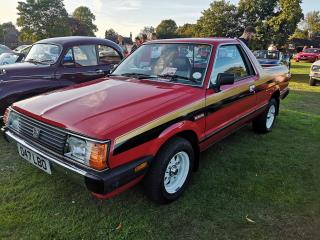 I received my first Tamiya a Subaru Brat for Christmas 1983, i raced this to destruction over the following 12 months and the following Christmas received a Tamiya Frog. I loved both those cars and neither exist now which is a shame but thats how it was back then. Around the summer of 1985 I saved up and bought a Tamiya Hornet and then an AYK Bobcat. I finally had a Marui Hunter (2nd hand) and a RC10 (again 2nd hand) All were raced at Aire Valley Buggy Club at Horsforth near Leeds West Yorkshire. I had great time running them and have fond memories. Around 1988/9 I stopped racing mainly as I was then into 1:1 cars, I was never really successfull although I did manage a national final at Newby Hall and had a mention in the Model Cars magazine. I did the usual and sold all my cars off around 1990/1.
move forward around 9 years and a friend said he was starting a racing club for touring cars in Selby, i thought why not and purchased a car from the freeads (a Subaru Impreza TL01) Loved that car and had great fun - again quickly trashed, purchased a new HPI Sprint when they came out (still have that) and a 2nd hand Schumacher Axis2 (not a fan of that one though and sold that on)
Around 2002/2003 I looked on ebay and purchased a vintage Brat which I restored and still have in my showroom, then a Frog and the addition started. I've had numerous cars since and I am very proud of my involvment with the Tamiya101 guys - Stevo309/Volksrod/Purplebugsy/Wireless/Moosey and the rest. Had great times buying/restoring/running as intended. Still have a couple of cars left from those days but most sold on. I've traded hundreds of parts/cars around the world, however my main passion is still the ORV Brat/Frog cars - Have a look in my showroom I always try to keep it up to date. Thanks for looking ... Zakspeed :-)