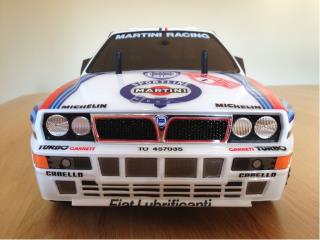 Got my first Tamiya, an XR311, as a Christmas present all the way back in 1981, then after a year or two, forgot about RC until I stumbled across the re re in July 2006, at which time I also discovered and joined Tamiya Club and caught the all too familiar addiction.
I'm mostly interested in building kits (the chassis rather than bodies) rather than running them, and like both electric and nitro, more so when I can do some modifications or where the kit is just a bit 'different'.

I've collected, built and sold many many kits over the years including the one I use for my member page image - a TG10-Mk1 Lancia Delta HF Integrale (those decals sure were tricky!). Most of the kits that have passed through my hands since 2006 are in my showroom as a nostalgic record even though many are now no longer in my possession (so if it's listed as 'extra info', I no longer own it). I still have some runners, and started collecting against the start of 2020, and already have several projects on the go and planned for the future.