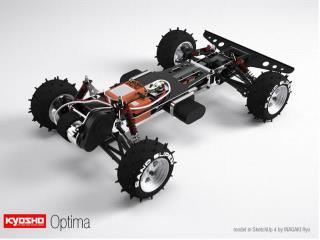 I began with a Frog when I was 14, but... actually I'm a fervent Kyosho Optima series fan, and am collecting lots of kits and parts for these... I owned a javelin since 1986, an ultima since 1987... I lost interest when Onroad racing and 1/8 engine off-road became mainstream (I prefer electric to gas-powered cars)... until I chased a set of Option House gold shocks on Ebay2 years ago (2004), as I always has been a shocks-crazy :-D and the craze had begun... until now, I have more than 30 Optima/Ultima/Mid/Rocky... and a Hotshot and a Bigwig!
Besides, I'm a professional computer graphical artist/architect. thanks!