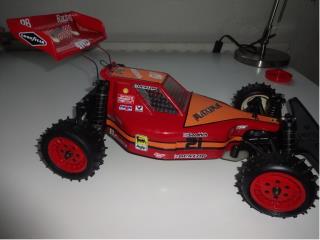 My First RC was a Marui Samurai. I always wanted the Hotshot but when I was 14, I went to buy the car and found I did not have enough money:( So the guy at the store in London said that his best car was a Marui Samurai for the budget I had. He told me it was a great car, even better than the hotshot!! I believed in him (well I was only 14) I Purchased the car and built it with some help from my Uncle. I ran it a few times but it fell apart after using it with a Very fast Demon Motor.

Then bought a Kyosho Turbo Optima Mid. Wow what a car. Built it, and sold it for £50!! very silly!! Never even used it! I gave up RC when I was about 17 and did other things. A few years ago I went on eBay just to check on the Hotshot I never had and decided to buy one. After that I became slightly obsessed with RC all over again!!