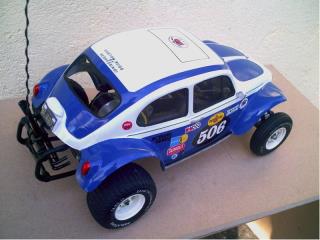 I got in to the hobby back in the 70's. Starting with static kits until such a time as I could afford to buy radio controlled models. My first car was a Cam Am Corvette, which went forward only when switched on and had turning via the remote.

Eventually I was able to barely afford the real thing (it broke the bank at the time!) This was in '84 and of course it had to be the Grasshopper. Over a period of time it was hopped up to Hornet specs including the shell. I also had a Sand Scorcher shell which was painted in the same colour as my real VW. I also had various sets of wheels and tyres for it from the Rough Rider and Fox.

I like to get cars in complete but poor condition less the shells usually I enjoy restoring them to run.

I've lost count at this stage of how many actual runners I have. It tends to chop and change I still have my favourites that I won't part with. But others have come and gone.

09 - 03 - 09 Thought I should add some of the members I have traded with. There are others who's names escape me. Let me know and I will add you. Dready, Ruffgeezer, Sladoz, Andersop, Gruntfuggly, Renken, Old Fella, Earnhardt, Stickerbod, crash cramer, rich d, solow