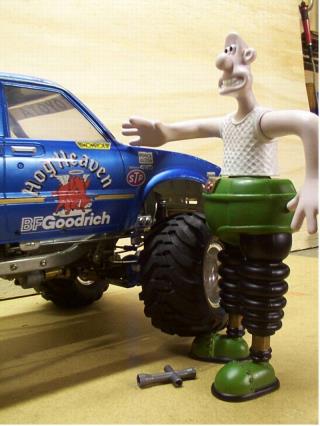 Hi,
I got into RC sometime around the late 70s. I picked up a second-hand Associated RC12 pan car which got well and truely thrashed around the school playground and 'raced' against my mates home-made monster. His had a Meccano frame and used coffee jar lids as wheels! (times were tough back then). We did this for a year or two and then gave up.
I got back into it in the early nineties. My first Tamiya was a Blackfoot - also second-hand. It is still in excellent condition but painted blue now (hence the nickname). Next was a Grasshopper which is now more hot-melt-glue than Hopper! I regularly bought second-hand cars out of the Trade & Exchange to use for parts and invariably ended up getting them running as well. I didn't buy a new kit until just over a year ago!
I didn't consider that I was 'collecting' RC cars and, unfortunately, got rid of some and gave some away. Most of my cars are well used but just lately I have been giving a few of them a bit of a spit & polish and they look ok.
I am just as interested in the other brands as I am in Tamiya.


You can see more of my stuff here: