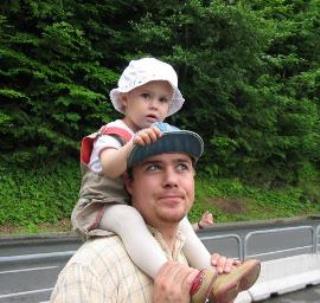 Hi, my name is Uros, I'm from Slovenia. My Tamiya craze started at early age 8-10 (in the begining of the 80's) - the first contact trough colorfull catalogs and the dealer's shop windows. Later (besides school and my sports career), I was more involed with building scale kits than I was 'in the RC models'. Building scale kits, I became three times national champion, so after 'been there, done that' I became (with a little help of my friends) more and more involved with RC racing. Currently I am racing 1/10 electro onroad (Tamiya of course) in national championship and national HPI challenge. In winter we are racing 1/18 scale indoor local challenge. Too bad - Tamiya cup does not run in my country.
Besides that - I rememberd a lot of nostalgic Tamiya RC models of the past years in which - at that time - I was not so much intrested in. The fire still burned under the ashes, and it finaly became an inferno three years ago, when I was able to run trough the warehouse of the former Tamiya suplyer.
I found a NIB f102 Williams F1 and two Tamtech Ferraris 643 with radio. Since the owner didn't know the collectors worth, he sold me all of the kits - let's say - 20 EURO/piece - as he would given them me for free! As I was leaving, he said that he should have a 'few' boxes of returned models, which were not complete. I returned a week ago and there it was a pile of about 16 boxes containing: Super hornet, Manta Rays, three more Tamtech Ferraris 643, a few more F102 (Williams & Mclaren), Two Bear Hawks, Bush Devil, Super Blackfoot, etc...
From all the kits were missing mostly tires - so they were completed without serious problems. Hard to find part was E-parts for Super Blackfoot, which (after searching half of the world) I found at the dealer 100km away from my home. Only in Bush Devil box were just a couple of parts left - the competion would be hopeless - so I used the parts to complete Super Blackfoot. All of them were/will be built as shelf - 'cause I'm racing carbon wonders without any nostalgic worth today.
What I'm looking for at the moment is the Hilux and Brat (doesn't matter if re-released).
I'll be adding some pictures of finished builds in a short while.
This RC and collector stuff seems the right thing after finishing my sports career so I'll be sticking to it for a while. And... ...being 35 I hope, I have a couple of years of a nice hobby in front me.