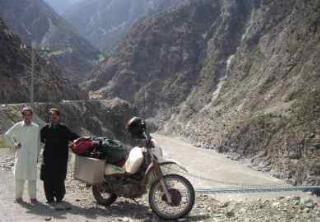 Got in to Tamiya electric/static models when i was 12 when I saved all year for christmas so as to buy a hornet. Hooked from then on! Upgraded the rear tyres to some brat ones 'cos I was fed up killing the spikes so with full bearings and a tuned 540 I was faster than anything out there(well maybe!), but also could only turn on tarmac with a full 9-turn barrel roll !..Both static model Dakar bikes and the walter wolf, a few guides and catalogues then a thundershot for a while but then suddenly sold it all, as things like motorbikes and girls were getting in the way!
Fast forward to about 2003/04 and I bought a baja champ on a whim for a christmas day build, bashed for a while and then in the space of a few months went out and bought all the things I wanted but could not afford when I was younger! As you do! Suddenley I had got that feeling back from when I first got my hornet!
Ahhh it's a happy feelin'................
Now two kids and a mortgage later Ive collected/restored/sold/traded a fair few but at present own Both Dakar 1/12 Static Model Kits,a Wild one hybrid Baja Racer, an original Hornet, M-01 mini cooper(x2) and turned the baja champ into a brushless beast...oh and a VLB for my eldest!
My real passion I think is in the build but time is limited on that front...but the journey is the destination!....and im back!