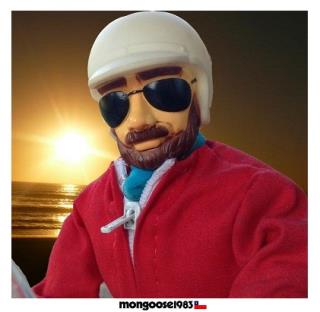 Hey everyone. I used to be a longtime TamiyaClub member. Something happened in the way and I felt like leaving. Anyway...

My name is Erich, and I live down in Santiago de Chile. I'm a college professor, a professional historian. My nickname deals with my past as a BMX racer, and 1983 is NOT the year I was born. Actually, that was my best year in the school circuit.

I have a feeling for quality Japanese things. One of them being these incredible scale cars. Wait a second, they're not made in Japan anymore! Ooooh

The customized Midnight Pumpkin Ford F-100 pick-up was my 1st Hobby grade RC vehicle. Fell in love with it back in 1988, and it took me long to raise the money to buy it. What an unforgettable afternoon when I got to decide between that one and the Black Foot kit! I went for the Pumpkin, and spent literally years of happy moments with that amazing little truck. I would run it on Sundays with my cousin who'd run his 1986 4wd Boomerang (yes, he still have that old goat).

I returned to the hobby because of a Black Foot truck that I found at a local fleamarket, many years ago. From then on I have found, bought, sold, and exchanged many Tamiya RC models. It still amazes me that I have had so many of the cars I remember I literally dreamed of back then, when I used to walk long distances to just stare at them at our LHS, ''Hobbylandia''.

I like dirt stuff and in a way I'm some sort of 4x4 nostalgic. I don't like ''sissy'' motorsports, I go for Tractor pulling, Mudbog racing, and Monster trucks. Heavy & powerful vehicles have definitely been a turn on for me since I was a kid. I'm a huge fan of the old TNT motorsports shows, too.

Right now I have the following Tamiya trucks & buggies (okay, these plus a few Robbe/Kyosho, one MARUI, oh and one HPI, too):

There must be other TCers I forgot to mention. Please refresh my memory if I did! Thank you, guys!

Other than that, nowadays I am enjoying my cars whenever I have a minute to do so, and of course I'm always after replacement parts. I sure enjoy the hobby, and I have a happy life.

And if anyone is reading this... well, I hope you have a very nice day!!!