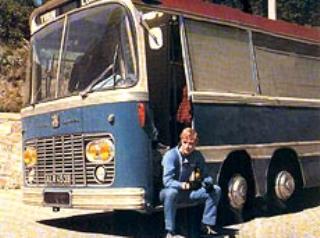 My first Tamiya RC, back in the early eighties, was a second-hand Ford Ranger which didn't survive the use and abuse that it suffered. I feel a bit nostagic and the need for another one when I see some of the examples on the TC site!
I have had a few other models since then including Escort RS, Mini(s), King Hauler, F350, Clod Buster, Hummer and Twin Detonator. A recent addition to the NIB pile is a Unimog crawler and MFC unit as they were going cheap.
The ongoing project build is a scratch design and build of a 1:10 scale RC Harrington Legionnaire - more commonly known as the Italian Job coach!! It's now at the stage of a rolling and steering chassis and utilses all customised Tamiya running gear from various models and spares. Who knows when it will be finished and there are also three NIB Minis on the shelf also waiting to be built to complete the theme!!
Here in Dubai there are a couple of model stores that stock Tamiya models and gear but it is a bit of a gamble to what is on sale at any one time. This results in true custom repairs and making do with what you can get your hands on. The best thing though is that one of the stores sells it's small selection of models for a lot less than UK prices!!