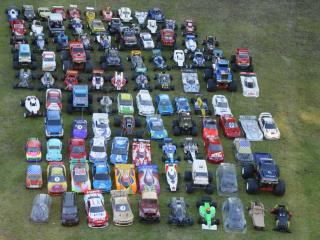 I have owned Tamiya R/C cars from the age of 8 and been collecting seriously since 1998. My first car was a Holiday Buggy which I still own, although nearly every part has now been replaced. The car was purchased by chance from my cousin and I only 'played' with the cars for the next 6 years until I took up racing them. I helped organise and run an indoor racing club north of Sheffield, where we raced indoors on carpet from 1998 - 2012. I have actively raced in the Tamiya Eurocup race series in the UK from 1998 to 2002, and in 2005. This is the perfect place to see all the current and latest models racing together up and down the country. I am now trying to concentrate on collecting the earlier models for my collection such as the first on road cars. My collection is mostly 'off road' cars and monster trucks with newer on road cars as well.

I am currently re-visiting many of the first 100 cars I have , with a view to getting them up and running with the correct period Acoms radio gear. I'm a huge fan of Riko , Beatties and the way most people used to buy / run them , so bit by bit I want to get them all up and running and kit standard only and appreciate them in this form.
**Please note NONE of my cars are for sale unless they are listed in my 'trades' section**