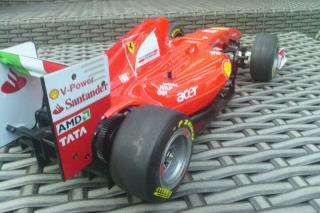 Hello I am Alex
I am from 1970 and living in the Netherlands ,married and we have a son .
started out with a second hand rc ASW15B gliderplane that I bought on my twelve birthday for 23 Euro's and a Graupner D4 2channel rc 40mhz rc set 55 Euro's at the time.
lost al my savings on this set but dreamt away every time I looked at the glider-plane.
Learnt to fly my selves and stayed mostly with planes and helicopters.
My brothers friend work't at Mitsubishi Netherlands at the time 1984 .
When the launched the Mitsubishi Pajero here,the buyer would get a Tamiya Pajero as a gift.
One of those ended up with us thanks to my brothers friend so we hat lots of fun with it.
Then +/-11 years later my interests in rc cars get bigger.
Mainly Kyosho electric and also nitro cars.
Tamiya was not for me at the time with those plastic body's!.
Also have had some Serpent electric pan-cars .forgotten the name of those cars.
But the where serious racers.
After that flying rc helikopters has taken the overhand again.
And 2 years ago I have gotten back the rc car fever again.
But now loving the Tamiya's with there plastic body's!!
Now the collection is still growing .
And specially the F1 cars because of my nephew also my neighbour .
He made me crazy of Tamiya F1 cars every time there was one on a trading site he came over and told me.
So now I have 23 F1 cars and love formula 1 racing.
He is a walking F1 encyclopaedia from the beginning till now .
He now's everything from cars drivers crashes .
Unbelievable if you guy's have some F1 questions ask them to him (tamiyaf1racing) and I am sure he now the answer to your question .
So two TC subscribers as neighbours is pretty rare I guess .
Thanks for reading this and hope you have fun looking in my showroom.
Cheers Alex .