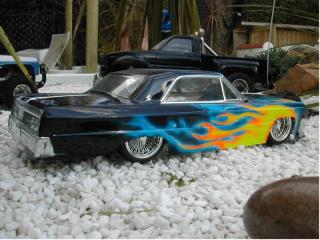 My life with R/C cars all started in 1990 when I picked up a Rocky 4x4 and a Big Bear from a neighbor , which I sold on 2 years later. Then in 1991 I picked up a 2nd hand Tamiya Hilux with out radio gear from a local model shop for £35. I only had 2 channel radio gear so I just used it in middle gear for it's test run, the battery went flat and she went into the curb and broke a knuckle arm. While she was unusable I started to rub back and smoothed the body work(as the gutters had taken a beating along with other parts of the shell from a previous owner) in the 90s, not knowing what she was worth. She stayed unfixed in my until I met up with Blazer Frazer(thanks bud) and now she's on the mend. But I'm looking for a pair of head lamps. She has been highly polished but the body is still having major work done to it.
In 2002 I picked up a TL01 with out radio gear but with a M.troniks 350 PB speed controller and a Infinity mod. motor for £12.50 and a Rough Rider with out radio gear from a local car boot for £5 she is missing some bits like shocks, arial and front bumper a long with some other bits.
But last summer(2003) was the best because that's when I found a Futaba 5 channel radio set with 3 servos ( that's now in my Low Rider with 1 extra servo. Thanks to Rob Chaldecot's mate for the spray job) New in it's box for £15. And on the same stall My Blazing Blazer with out radio gear, only missing a few bits like rear bumper, roof, 1x wheel cap, drivers arm, and the tyres had seen better days(thanks again Frazer for the tyres, wheel cap & radio gear) down the same car boot as I found the Rough Rider. And can you guess how much she cost me? Yes a skin diver. On the 10/1/04 I put the radio gear in and drove her for the first time....... Man what a rush..... To any one that does not own one of these fine machines, buy one or go to a meet and try and get someone to let you have a go, because using a 3 speed is some think else.
So I think I could say I have been very lucky in owning some of the finest vintage Tamiya cars and knowing some cool friends.