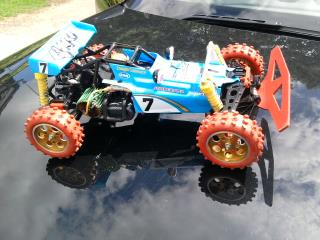 I started my Tamiya affair with a Holiday Buggy back in 1980. I later joined my local race club (Worlds End Off Road Club, Northampton) & found myself racing SRB's & Kyosho Scorpions etc. I continued racing at clubs like The Worlds End up to around 1987 having a Subaru Brat, modified Frog, a Hotshot followed by a Boomerang (when they were first released). Unfortunately I then stopped and sold everything to concentrate on being a teenager!
However, at Xmas 2008 my wife bought me a new re:re Hotshot which brought all my passion for Tamiya & rc'ing back! Since then I've been buying & restoring many rc cars (mostly Tamiya).
Only a some cars are in my TC showroom, it's always out of date!!
I've joined many (SIG) groups & been to some TC events, where the Retro Racers / Quick Silver SIG's lead me to vintage racing, which has now continued at the numerous IconicRC events. Take a look at the TC forum for details.