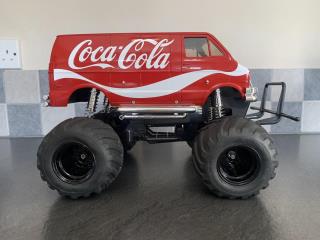 Where to start... I started collecting when I was 8, another ones of those 80's kids. The first car I got hold of was a Porsche 959 already built, wish I still had it! I then moved on to Monster trucks, I bought a Lunchbox from a friend and parts from a midnight pumpkin from another friend, swapping the bodies made it feel like I owned 2 trucks.

Few years after later I purchased a Kyosho Raider (it was cheap at the time!), the first kit I built from scratch, which I still own. I carried on using the Raider & Lunchbox until my late teens when life took over and the cars got put away and forgotten about.

Then in my mid 30s I got hold of a load of Vintage Tamiya cars & trucks which reignited my interest, not only did I start to rebuild them, I also dug out those long forgotten cars from my childhood (see my Scooby Doo Lunch Box project).

Looking for parts I found this site and joined 2009, life has still taken over a few times over the years but I've carried on collecting and restoring, I got a lot of showroom updating to do, which I'm hoping to get on top of soon.

I've never bought another new kit since my Raider but I did get a Neo Fighter for my 40th Birthday which I enjoyed building and enjoy driving even more.

That's it really, looking forward to chatting on the forum.