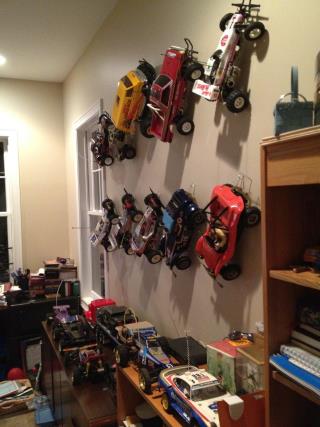 I have had tamiya cars since I was a little kid, about 1985 or so. My first model was a sand scorcher I got from a garage sale, it was brand new, half way built. Then I got a wild willys, also from a garage sale. Then Hornet followed by a Fox both new. Later bought a Porsche 959. Then in '97 or so I got an Associated RC10 GT nitro. Around '08 I moved and found my boxes of RC stuff and got back into it again. I first slowly purchased parts for my 959 and finally got it back to good condition. Then I realized I could buy all the cars I wanted when I was a kid, so the addiction began. Now I have too many.... not that there is anythign wrong with that. Most all are ready to run (even the new built ones that have never been run). But now that I have too many cars, as I restore them, I will probably start taking receivers out of the shelf queens and using them in runners since its kind of a waste of money.

I have 4 vintage pistol grip controllers that I use which have different crystals in them. And the cars each have 1 of the 4 crystals so I don't have to swap crystals ever but can run up to 4 cars at once (which I have yet to do).

I am pretty sure my Scorcher and Willys are just going to end up being parts cars because they are very incomplete.