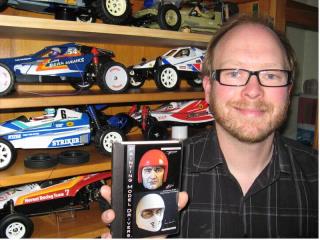 Received a NIB Tamiya Falcon for Xmas '88 after owning several toy grade cars. In 1991 I sold the Falcon and saved the remainder to get a Monster Beetle, it was a lot of Lawn mowing back then. Studies took over for a few years but later bought a Blitzer Beetle and Corolla WRC in 1998. Lost interest again and were sold. In 2004 I discovered Tamiyaclub and quickly amassed a dozen cars but then feeling guilty about spending money on so called toys I sold nearly all of them. From early 2006 I started collecting again seriously but this time I can justify it and I keep nearly all the cars I can find! I have at last count 87 cars with somewhere around 65 of the first 100.


At the beginning of 2008 my partner Kelly and I joined the Hawke's Bay RC Car club, (had been down many years and re-established in 2005) We've been enjoying racing some modern vehicles intermittently and had a little success...


I worked for Weta Workshop in Wellington, New Zealand from early 2004 - 2010 as a professional model and prop technician. I'm due to return to Weta soon to work on The Hobbit. I love restoring the old cars and like to think I finish them to a high standard and install radio gear in all of them. For the last couple of years I have been developing reproduction parts and accessories to get a little more realism from the models.

My Goal is to collect the 1st 100 Tamiya cars in new built or restored form.

In September '09 I travelled around the United States for 7 weeks and met, Wyoming, Moondoggie, Crash Cramer, Victorious Secret and HighFlyer. For the second half of 2010 and early 2011 I have been living in Melbourne Australia and have met: Bullfrog, Glen'in'Oz, Kiasukid, Mr duke, Mr Retreader, and WillyChang. I intend to visit many more international Tamiyaclub members.