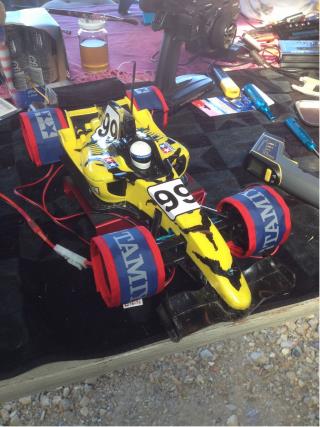 I've been 'collecting' since around 1991 when I got my first Tamiya, it was the thundershot QD (Quickdrive, prebuilt). When this little thing broke down I purchaced a secondhand Monster Beetle, some extra motors (Technigold and one I don't even remember).

Soon I needed more rides and I got an, even at the time, quite old german 'Robbe' Audi Quattro powered by 2 x 380's motors.

Then I stumpeld upon a real Thunder Shot 4x4. this thing was really fast and handleld really nice, used it for onroad as well.

Then I purchaced another Monster Beetle from a friend, it was a little abused - more or less used as spares for my other Beetle (damn those diff's and axels wear down really fast).

The next car I purchaced was the Jordan 191 formula 1 car, damn this thing was hard to drive but when when it got grip it just 'flew'. Drowe this ting at an oval biketrack, power by the infamous 'Acto Power', hit 85 km/h.

Crazy for more I went ahead an got myself a Dyna Storm, sweetest 2WD drive I have ever owned. I sold it to a friend later on, but now I have purchaced it back from him, Thanks Bjørn!

The last car I purchaced was a 4WD touringcar, the Opel Calibra. Really nice handling and ok fast on the track.

Inbetween all this I also had 'The Grasshopper' and one strange Kyosho I cant remember the name of :)

unfortunately most of the cars (everything but dynastorm and Calibra) needs some serious restoration. At the time they reside in my parrents basement, but I will try to restore most of them if possible.