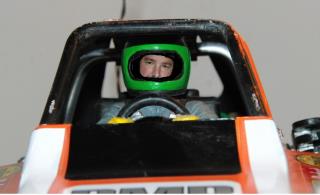 Used to (fun)race back in the day. Started with a Holliday Buggy, lot's of fun but slow and later got a Mitsubishi Pajero and a Audi Quatro.
Now, mainly because of the re-issue Buggy Champ, I've deciced to pick it up again.
Update: The Champ is finished and could almost use a rebuild. It's so much fun and I'm really ridin' it hard. In the meanwhile I bought a NIB TA02 Ford F-150 Racing truck and after discovering the greatness of the TA chassis have aquired two more 2nd hand. A TA01 Ford Escort Cosworth Pilot and a bare TA02 chassis which is now a Lancia Delta. Both are adapted with longer shocks, alu shock towers, and alu motor housing and are well used for on/off road rally racing. So in summary:

Expecting:
Carson Audi Quattro body for either one of the TA's -