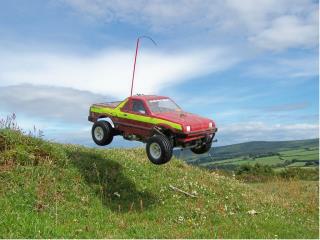 got my first car, the blitzer beetle back in the early 90s when it first arrived in the uk, i wanted the monster beetle but me parents were unable to get one, and the blitzer handles better anyway, but it only lasted six months and i had worn down the drive shafts due to a lack of grease. 10 years later, i decide to do it up, it now sits on my shelf looking beautiful, i have collected a few cars in the past year or two, mostly from bootsales n markets. they include two more blitzer beetles, a couple of bear hawks, all of which are good for parts and out of the four i have managed to get two runners. i also have picked up a fighter buggy and a madbull, which the wheels are gonna go on one of the blitzer beetles. i am currently using mostly my moddified king blackfoot and my hopped up stadium raider. i have built many different cars for friends, and i often request their old car as payment, this is a great way of collecting old cars for parts.photos of all these cars and a few i haven't mentioned will be available as soon as i get a digi camera.
i'm on the quest for a nice lunch box to accompany my nib pumpkin which will be built this easter.
tamiya rule the road and more importantly the off road !
Mike

2020 update, so yeah it looks like I wrote all of that above 16 years ago when I didn't use any capitols LMAO anyway, I'm still loving the RC Hobby, I have been lucky enough to get a few photos in magazines, write some reviews and my son Maximus and I are now proud to drive for Carisma Scale Adventure which is awesome. You can find more about me and my obsession with RC on Instagram, Facebook and Youtube, just search for Mad Mike Worthington :)