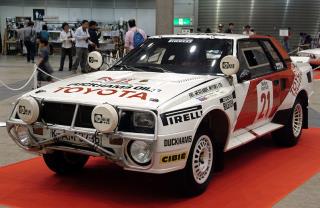 The year was 1982-ish. My age was approximately eight. I've already had a couple of RC cars, but non that exceeded two mph. After trying out a Grasshopper belonging to a friend of a friend, I became sort of possessed with the speed and look. My own dull RC cars couldn't keep up with the blistering speed of a mighty 380 powered by a modern 6V pack.


My kind parents soon realised what I was going through and promised to buy me a proper RC car. I had no clue which kit or brand it would be. Even my father didn't know. We didn't care. Therefore it had to be a Tamiya. Because that's the only brand sold by our local hobby/scuba store.


By the way, the store was named 'Hobby-bua', which can be roughly translated to 'The Hobby Booth'. A simple, worn down building which made me seasick. From the entrance the floor went downhill for a while, then it started to go uphill. And when it rained outside, it also rained inside.

I suppose that's the reason they had to offer scuba gear.


The stores owner looked a lot like Jarl Goli, a national celebrity known from kids TV shows and a trusty employee at 'NrK', The Norwegian Broadcasting Network, the only network that aired in Norway back then. 'Drifted' by the state. In fact we are forced to pay taxes twice a year for owning a TV or tuner, just for keeping this unnecessary network alive, even today. So much for democracy. However, 'SVT', Swedish Television, was possible to receive with an huge UHF antenna.
Anyhow, his NrK host look-a-likeness made me relax. So I didn't care that much of the dangerously lousy condition of the floor, the walls and the ceiling. I didn't catch his real name, but I memorized every name of the model cars on the badly built rack behind his back.


I was given a car named Super Champ. My dad had to assemble this technological victory over a normal childhood. And it was a great car once finished. My fellow schoolmates suddenly became very jealous. Those poor mates only had such lousy cars like Frogs and Grasshoppers. How I pity them.


The great Champ was in my posession for some time, until my father one day introduced me to a slightly older boy, who offered to trade his ugly and out of this world heavy oval race car in exchange of the Champ. Which I in fact did accept. An inexcusable act I have regret ever since.


Afterwards I've owned almost too many RC cars. Made by Tamiya, Kyosho, Hirobo, Marui, MRC and more. If only I didn't wrecked nearly every one of them, I would be the proud owner of a great vintage collection today.


Cars that did survive the rampage, partially or entirely:

A pretty rare MRC 1:8 Rabbit (its body suffered the same destiny as the previous mentioned one)


The folloving didn't make it:

Fox (one of my all time favorites)

A couple of Strikers

Grasshopper (both type I and II)

Boomerang (still got the body)

And sadly enough my very first nitro buggy; a 1:8 Tomo Lupus. I'm not entirely sure that is its real name.

So I buyed another one a couple of years later, and even that one was outrunned by practically everything that moved. Even by slugs. What a surprise. So I had to demolish that one too.


I do however possess some leftover parts from a wide range of these cars. So I'm planning to construct a hybrid some day. The chassis will be made of bird cage metal. That will be my legacy.