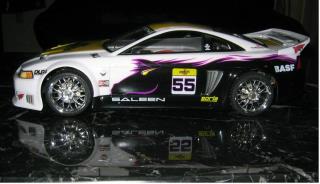 I've been into R/C since 1985 and started collecting cars when I started to work in a Hobby shop in 1995. My first real rc car was the Grasshopper, then the Frog. After that I ended up getting a Super Shot which was way more advance and complex than I was used too. Which led me into another aspect of the hobby. . . Nitro powered cars! The first 2 nitro cars I remember having were the Associated RC250 and the Kyosho Assault.
Then of course as the years past, I got into flying rc planes and helicopters, nitro and then electric. Well, what do you do after flying powered planes. . . You fly gliders! Lol. Luckily I lived close to a known glider flying spot on the coast and flew almost weekly depending on the weather. My first glider was a Zagi, foam flying wing in which we do combat flying where you fly a oval pattern and try and knock the other wings out of the air! Then I got into composite gliders that were sleek and fast, well as long as you have wind!
Fast forward several years and my main focus is just collecting and restoring. eBay has seen a bit of my time and money the past several years! Lol