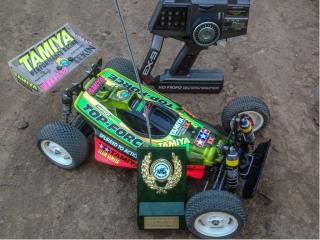 As a young teenager back in the 1990's i was lucky enough to race a Vanquish, Egress and Top Force; as well as a Graphite RC10 Team Car; some Yokomos and Losi's. I was able to do this with the support of my Father; and my younger brother was very handy racer as well.


I liked to concentrate on 4wd, but had most success outside of club racing at major events in NSW Australia in Stadium Trucks with a Losi LXT and Losi XX (2wd) late in my 1990's racing life.


A few year ago I rejoining the hobby with a TRF 201X. I now have five of them! 3 originals for the kids to race and an XM and an XR for myself. I use the XR in the dirt and the XM on carpet. I also have a TRF502X. I have raced both mod and stock (17.5T Blinky) in recent times and have settled of late racing stock, as I can race competitively without too much fear of destroying my cars!


I also race vintage meets with my trusty RC10 Graphite, Top Force and RE-RE Egress and RC10 Worlds with a bit of success.


Currently I am part of a newly formed Club in the NSW Southern Highlands. We are in the throughs of bringing a track to this part of the world to save many of us from having to drive to Sydney (2 hours to a track) to race. Many of us are also vintage racers, so we'll have Vintage Event from time to time.


I have lots of photos in my showroom of cars past and present that have been through my hands. My goal is to post a picture of the 5 TRF201s together once they are all cleaned up. I am hoping to acquire a 201XMW soon before they are all gone!