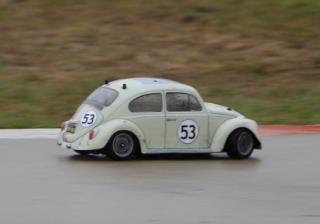 I´ve been attracted to Tamiya since childhood,
starting with buggys.
First car was a XR 311 I sold to a friend at the time, but I was always keen on the Sand Scorcher my father owned and still have it.
Buggy business went down a little in the 90's, but I still have in parts my last Buggies Top Force Evolution and Dyna Storm, which I raced in 1993 for the first time at a local Town-Championship.
From that on I finally came to onroad in 1997, where I used my New M02 Beetle in my one and only Tamiya Euro Cup race, which was quite successfull for me (A-Final 3rd).
As end of 1997 a local championship for Tamiya onroad cars started, I got addicted to racing Tamiya cars finally.
As I ´m also into real Beetles a lot, (restored my own 1:1 model from 1996 to 1998) I raced my M02 Beetle with lot of success in the new championship, getting new driving practice.
I still race in that Championship (www.TTSC-Racing.de), nowadays in 2 classes using a TT01, which we established as a standard class car. Only small Tuning is allowed, to keep the races extremely fair for Hobby drivers and new racers.

2010 I came to this page, and got completely blown off by all that Tamiya fans here. I always knew that my fathers Sand Scorcher was something special, but I fully got convinced of selling it never, never, never, since I saw all that mates keeping this Classics alive.
Now I finished my Re-Release, which was no discussion for me to get,
so the old one is not alone anymore. Next project beneath all the onroad stuff is to restore it with spare parts from the Re-Re series and to donate it to my father again for his car collection....