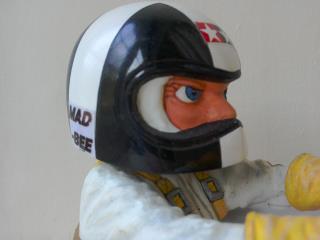 Hi guys, l am like a lot of you guys on here an 80s child that fell head over heels in love with Tamiya!! Back in the day l raced at my local club on Sundays with some success l will say! My first tamiya was the Holiday Buggy.........Well not quite l loved this buggy but it was not on sale by time l saved the funds up! So it ended up my first tamiya crush! But then l clapped eyes on the Subaru Brat and Boom!!!! Had to have it! So bought it(well parents did) and had great fun with it but soon realise it was no racer so hopped it up to the Frog and then the results started coming in! Made it to C final winner!!Next car was the Fox and Wow! what a performance gain...B final winner but wanted more so next up was my Boomerang! Well l hopped it up pretty quickly and bang right into the A final on most Sundays but never made to the top step of the podium unfortunately but so close! 2nd or 3rd but could not get the better of a couple of guys that had such talent and great mods on their buggies! (PIC IN MY SHOWROOM OF MY OLD BOOMER AND SOME OF MY TROPHIES WON)
Very proud!!! Sadly though my old club stopped and packed up in the late 80s and with it my interest in this hobby too! Music, loud speakers and party time took over and Girls! Roll on many years laters and l saw a tamiya guide book and bought it for resons l don't know but the first page opened on a Blitzer Beetle that l had never seen before and something stirred inside and thought serous about getting into the hobby again but felt was too old for toy cars! But then found the Tamiyaclub and realised it was full of guys and older into these little toy cars lol that was it!!! 2011 to present day l have been bitten even stronger then before! I have a modest collection now of some vintage and rere and l do drive cars down the beach somtimes when l can!
Well sorry for such a long story but then it's a lot of years to cover! Just like to say thank you for all the comments and great bantar over the years!
Cheers Mad-Bee
James.

LIST OF FRIENDS AND SIGS BELOW AFTER LONG SPACE!