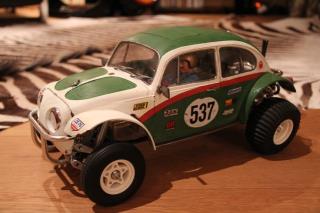 My first TAMIYA RC was the 'Lunch Box' in 1988! Later I also had the 'Mud Blaster', the 'Porsche 959', the 'Ninja' from MARUI and the amphibious six wheeled 'Rodeo' from ROBBE. But when I was about to expand the hobby to planes and helicopters my teenage needs kicked in and I forgot pretty quickly about everything rc! Then 2010 I discovered that the local toy store – where I was shopping for my baby daughter – had also a hobby department... long story short, I came across a re-re 'Sand Scorcher' and was once again hooked!
A year later my RC enthusiasm was put on hold again as we had to move and I didn't have time and space anymore...
Now another two years later we moved again and I got my stuff out of storage, a new crawler for X-MAS... well it looks like I am slowly coming out of retirement... ;-)