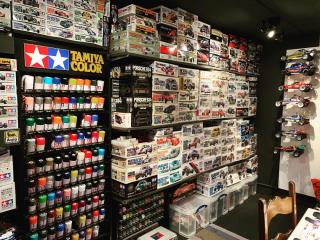 In the 80's I started with a Pajero and later on a Boomerang. I had a lot of fun on the beach running both. Then somehow lost interest but made some static kits. The static were always Tamiya's and after winning some contest in the 90's, the hobby faded (static is very timeconsuming). Back in 1994 I had some TA02's and raced them at a local track. Trashed several Audi A4, Volvo's and Alfa's. I still have most of the bodies. Since then I always had Xray's, Corally's, Associated for competition racing, but when it comes to quality and scale you can't beat Tamiya. But with a lovely (now) wife at my side, racing was not my target anymore. I was more into making perfect scale bodies with a perfect finish and they were too good to run them. In 2004 I discovered Tamiyaclub and found a NIB Pajero (my first love) and built it. My mission is to built all the kits to a high standard and they have to be NIB or NB. Like most of us with a 80's guide book as a bible I started collecting and building and it never stopped.
Anno 2010 I really like the re-re's from Tamiya because you can built them and run them without thinking about spares or value!
Hope you like my collection