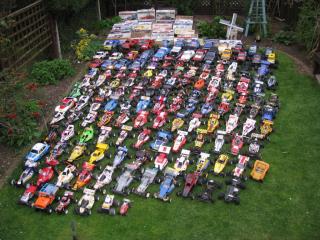 I was originally interested in RC cars back in the mid to late eighties. My first car was a Kyosho Pegasus, then followed by my first a Tamiya, a Hornet which I got for Christmas 1987, a few years later I also bought a Mardave Meteor, then later on I swapped the Hornet for a Tamiya Lunchbox then later still swapped the Lunchbox for a Kyosho Optima Pro which I still have. Then I grew out of my interest in RC's and relegated my existing cars to the Loft round about 1990-91...

Over a Decade later My interest in RC was re-awakened thanks largely to my Cousin (Trabbi daz) who introduced me to the then rapidly growing RC collectors scene on the Internet and I got bitten by the bug again big time ;) I started by semi-restoring my old cars from the attic back to running condition and have since bought many dozens more off Internet auctions and other collectors, my Collection is growing all the time. I had only 3 cars in December 2001 but now I have well over 100 ;) the trouble is every now and again I spend too much and over gross on the car buying and usually end up skint :( so I have to lay off the car buying for a while to let my finances recover a little :)

In case you haven’t noticed, I'm the only member on the whole of Tamiyaclub who bothers to do a decent descriptions to go with my showroom entries, well not so much descriptions as ESSAYS ;) I leave out no details when doing write-ups on my cars and I already have a number of Fans who appreciate my work, I just wish more ppl would put in the effort to describe their cars instead of just posting a single sentenced picture :(

my showroom is constantly evolving, many other my older entries are out of date and need to be updated, its a slow process but I'm getting there ;) also I’ve been way too lazy in not doing full descriptions for my latest addition for the last 6 months or so, it’s a very time consuming job, and I’ve gotten so far behind now, that finding the motivation to catch up is all to a daunting prospect :S but I hope to be able to catch up and keep pace with developments in the due course of time :)

So WATCH THIS SPACE, and Enjoy my collection. Many Thanks… wldnas ;)