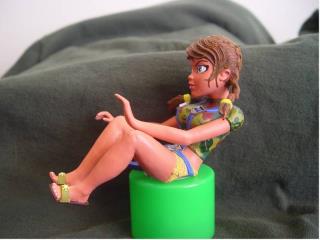 I am a commercial sculptor working primarily in the toy industry, I have been interested in Tamiya rc cars since I was about 11 yrs old, when I talked my dad into buying me a Grasshopper. I ran that car to death. After the Grasshopper I also had a Blackfoot which i also ran to pieces. I became interested in tamiya cars again when they reintroduced wild willy. My wife gave me one as a christmas gift and I have been trying to build the collection that I always wanted as a kid ever since. After my wild willy 2 I purchased a blitzer beetle, then a Mad fighter. After building them up my wife bought me a Sand Scorcher from ebay (the women is a SAINT!!) which I restored. Then I bought a superchamp and then a willys wheeler. My collection has really started to grow. This site has put me in touch with many great people. I am very eager to talk to other Tamiya collecters and hear their stories and see their cars.