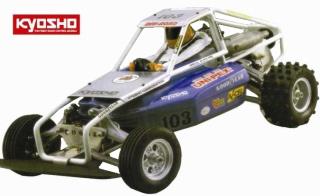 First car was a Hornet, given as a gift in 1985. In '87 I bought a Kyosho Ultima and upgraded it endlessly over the next couple of years. During that period from 1985 through 1991 I lusted over just about every new Tamiya and Kyosho buggy that came out, especially the 2wd models. Started collecting 'vintage' buggies in 1999 when I came across an Optima Mid at a local swap meet, which revivied my interest and I started collecting some of the other models I always wanted but could never afford as a teenager. I still buy the occasional Tamiya re-release to re-live the dream, as I can no longer afford vintage Kyosho prices on eBay.