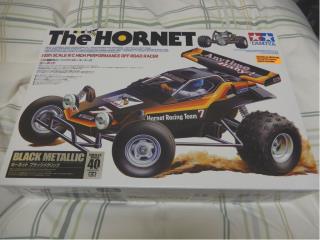 I got my first 1/10 car back in xmas 1985/6, the Road runner, I was short of 40 dollars to buy the Hornet at the time from the local Kmart in Burwood Australia and its a decision I have regretted to this day. The road runer was based on the grasshopper from what I could see, and very poor plastics etc, and within 2 weeks I had upgraded the motor and battery so that it now drove with a bit more oomph. I thrashed that car like no tomorrow and after breaking the rear box 5 or 6 times it went into its box and stayed there.... until I needed to rip out the radio gear for my next car... the Boomerang, it was one of the last cars still sitting on the hobby store shelf in 1991, no one wanted it back then so i watched it for over a year till the price dropped to $250 then i snapped it up. After building it and running twice (it was just too nice to look at) it became a shelf queen until 1997 when I 'stupidly' sold it to a friend for $50, DOH! that ended my rc car run until Tamiya brought back the reisues.. and luckily for me the Hornet came along... finally I could get the car that I wanted as a kid.... so i go 4 to be on the safe side LOL. The first has been run and run well, 2 have been sold to my mate and we raced together, and one sits nicely in its box stored away. Then the frog came along, was never a fan but got one built it, said 'meh' and it sits next to the hornet...same with the hot shot, got the reissue, said'meh' and built it and sits on the shelf never run... then again the Boomerang came along in 2008.... got 3 of those with all the hop ups for each, one built and run hard fully ball raced, the other 2 stored in their boxes. And this year the Super hot shot came out, missed the first batch but have just ordered one from the second batch from stellmodels and should be here this week, Im on the fence with this one, not sure if to build or just admire the box and all its goodies inside.