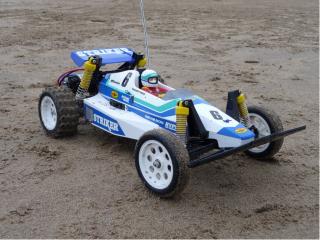 I first got hooked on RC cars in 1988 (age 13) whilst spending a year in Norway. My dad had got a job out there and the family had gone to join him for a year. The town we lived in (Egersund) had a model shop and I would often go in to gaze at the Tamiya RC cars. I remember the Bigwig being my favourite, but it was far too expensive. I ended up purchasing a Striker in Norway, but I waited until we returned to Cardiff a couple of months later before I bought the radio gear and battery. For some reason, the radio gear was a lot more expensive in Norway so it seemed sensible (even for a 13 year old) to wait until we got back to the UK. When we eventually arrived back in Cardiff, I remember going into Beatties with my dad the very next day to purchase the remaining kit – and so started a love of RC cars.


Over the next couple of years I mainly used the Striker in the street, but I did occasionally take it to club meetings at community centres and church halls in Cardiff – and I had a lot of fun racing it! I was never the best driver and the Striker obviously wasn't the best car for racing. I reckon I must have broken at least a dozen chassis during the time I had the Striker.


Fast-forward 25 years and I’m now rekindling my love of RC cars. I’m trying to build a collection of all the cars I wanted, but couldn't afford, in 1988. This includes the Bigwig, Porsche 959 and Celica Gr.B among others. Most will be built to run rather than display, as I have a young son and daughter that I’d also like to get interested in the hobby.


I've been checking out a lot of the showrooms on Tamiyaclub over the past year, and I'm amazed by the amount and quality of cars on show. I'm looking forward to uploading some photos of my own cars in the coming months.