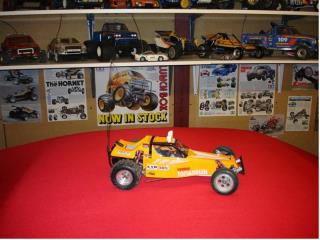 Many people know me as Blazerfrazer and have used me as a source of spare parts for vintage Tamiya cars over a 10 year span. I don't do so much of this now although I still have a garage full of parts I need to shift at some point.
Like most of us I was into R/C cars back in the early 80's and in 1983 I had my first car the Tamiya Subaru Brat. As a child I loved them and had quite a few! I always had a car or 2 up until 1996 where I started collecting Tamiya cars of my childhood. I think I may have been one of the few hard core collectors as I spent over £10,000 on spare parts from all over Europe! By 2002 I had managed to accumulate the first 100 Tamiya cars! I now realise it was the chase that got me so hooked because when I got there I lost most of the interest! sounds sad but most of the interest was lost also because I had very few runners and only shelf queens. My collection sat there as I continued a business selling Tamiya parts to collectors all over the world from my redundant stock. I then got interested in model aircraft and helicopters and did that for a few years. I started to sell some of the nib Tamiyas that I didn't really like as they were only there to complete the set! I then started to build up and buy runners of my favourites, this included AYK Kyosho Mardave and Marui! Now I have 30 runners and I am all interested in cars again !