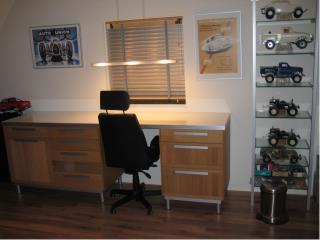 I've been in the RC hobbies for many years. It's actually my elder brothers fault:) He was a plastic model builder in the days, a pretty good one too. Except on patience and some models didn't survive his raging fist. He had a Tamiya 1982 main catalog and he gave it to me when I was 12-years old . I was so happy with the present and that book hypnotized me. My first Tamiya rc car was the Pajero Paris Dakar. It cost a fortune, did a lot of work to get the money together. That car was a very hard car to drive: it just kept falling over and over. Except on the local red gravel tennis court: what a traction! It took a few runs with the net to cover the driving tracks. 959 came up next and was a huge improvement over the Pajero. A Supershot was the next purchase and other cars followed. I started touringcar racing a couple of years later with a Mondeo FWD on the PK indoor circuit in Dordrecht. On the search for faster cars got off the Tamiya path and had HPI, Yokomo, Corally and Associated touring cars and raced club and national level. I ended my racing days with a TRF 415 Mark Reinhard edition. Up to a point I realized unsponsored racing costs a fortune and takes a lot of time. Then I uncounsiously decided to collect the old Tamiya cars. I started with the buggies from the '90 and now moving down the list in the first 50 cars.