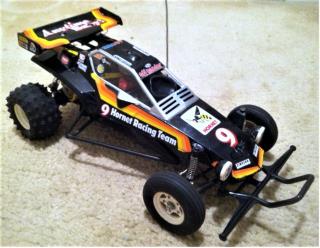 Hi there, my name is Mike and thank you for visiting my page.
I've actually been a paid subscriber to this site since December 2008 under the nickname 'R/CVet' but was recently forced to create a new account after an issue with AOL prevented me from logging in for over a year. I've been in the hobby consistently for over 30 years and it means the world to me. In no other way do I cherish my childhood memories more than by remaining active in this fantastic hobby. I own primarily random Tamiya models from the mid '80's but as an adult have branched out to accumulate certain non-Tamiya models I find interesting and/or nostalgic. My very first r/c car was a Nikko/Radio Shack/Taiyo(?) Martini Porsche 935 I got as a child. I don't remember what happened to it (probably dismantled it to see how it worked inside) but that got me started. Like so many, I then graduated to my first 'real' r/c car which was the famous Tamiya Hornet. A car I absolutely loved and still do. Unfortunately, that car was driven down a sewer drain by a childhood acquaintance over 30 years ago never to be seen again but it did get me hooked for life. I've been active in the hobby since then and from that point on purchased cars/trucks slowly and consistently over the years to amass a mostly vintage collection. However, I had no intention of collecting, saving or preserving models when I first started nor could I have possibly imagined what the vintage segment of this hobby would become at such a young age but I'm sure glad I stuck with it all these years. Most of the collection was purchased NIB when the kits were originally released with only a few of my most recent purchases being used original/NIB re-re kits from Ebay over the last several years. I put a lot of thought into every model before purchasing it and only own r/c models that I really like and/or have special significance to me personally rather then attempting to 'complete a series' or owning 'the first 100'... etc. I try to have a variety of different types of vehicles so I can enjoy a little bit of everything but I tend to gravitate towards 4WD off-road vehicles which makes up almost half of my collection. I like to have an interesting mix of sentimental NIB kits, a few shelf queens, some light/occasional runners and a few fun bashers to make for a well-rounded collection but even the bashers are well cared for and in excellent shape.

I've been equally interested in scale fast electric r/c boats (primarily catamarans) and hovercrafts for the same amount of time. I started out with a toy-grade, twin-screw U.S. Coast Guard cutter when I was a young teenager that I eventually dismantled, modified and lost while playing with it in a river behind my home as a child. Fortunately, I acquired two more that I will marry into one good runner. I then graduated to my first real r/c boat which was an MRP Fast Cat back in the '80's followed by a scratch-built catamaran fabricated out of balsa wood and styrofoam that I still have. I've also owned and sold a 1990's Tower Hobbies Turbo-Vee, a huge 40' twin-screw Admiral catamaran, a vintage Graupner Taifun hydroplane, Pro Boat Mini-C catamaran and a second Graupner Systems Catamaran hull. My current collection includes a NOS MRP Fast Cat, MRP Italia motor yacht, a scale NIB fiberglass catamaran, the scratch-built catamaran, two vintage ABC hobby Super Hawaii's, NIB ABC Hobby CESA 1882 catamaran, vintage new-built Traxxas Villain IV, NIB and runner Graupner Systems Cat, NIB Graupner Portofino, NIB and runner Asahi Wellcraft/Excaliber 40 Hawk, a NIB Monogram Splash Dancer and a NIB Kinetics U.S. Navy assault hovercraft LCAC-1 that awaits assembly.

I'm also into helicopters and started out with an old Kyosho Hyperfly purchased new back in the mid 1990's. Like the USA-1, it ended up being a horrible kit that didn't fly like a conventional helicopter which made it difficult to operate so I sold it. Since getting my feet back under me with the micro 'Havoc' helis (a ton of fun), I moved on and purchased a 4 channel fixed pitched Exceed r/c electric Airwolf that I'm currently getting acclimated to and enjoying every minute of it. I also have a huge Piper Cub r/c airplane inherited from my late grandfather after I purchased it for him, had him assemble it and then he unexpectedly gave it back to me. :) I should mention that my grandfather was a master static model builder for more than 70 years and always had many dozens of his models displayed throughout his home. I attribute much of my interest in models (r/c and otherwise) to admiring those incredible static examples and investigating the assembly of many of the different projects he always seemed to have in progress on his work bench for decades growing up (thanks grandpa! :). At one point, I tried getting him into r/c models by purchasing and building a new Super Hornet for him which he graciously accepted but never ran and eventually returned to me because he didn't know how to use it. I ended up selling it to make room for a re-re Hornet but now regret getting rid of it. Not knowing what to do with the Piper Cub he had assembled, I briefly and unsuccessfully gave r/c plane flying a try with that plane, then a smaller Kyosho Spree and finally an even smaller styrofoam trainer. I ultimately decided that it was not something I was interested in devoting time to so I sold the Spree and trainer. However, the Piper Cub remains on display in my collection as a homage to my late grandfather but is too nice to ever risk damaging during flight again. Before discovering TC, I occasionally felt a little guilty about owning so many R/C models until I realized that I was a mere lightweight in comparison to most enthusiasts here who own dozens if not hundreds of them which I find truly amazing. Fortunately, that fact erased my periodic guilt and convinced me to keep buying kits I like so it's all good -- being nuts is neat! :P

I will continue to upload pictures of my collection so please check back periodically for new additions to my showroom. I want to thank all the great TC members here who have helped me in one way or the other over the years by answering questions, providing valuable advice and offering rare parts for sale. PLEASE FEEL FREE TO CHECK OUT AND JOIN MY 'FOX FANATICS' S.I.G. OR 'SUPERSHOT' S.I.G. Thanks.