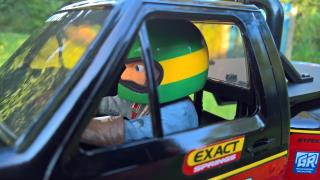 When I was 13 years old, a friend (rich family) was the owner of a Bigwig. I really had a crush on it, but not enough money. With help of my grandparents, I bought my Bigwig, with a Sanwa Dash, a single white paint can, a quick charger and 2 NiCd. I used my Tamiya a lot, alone in the backyard. Rapidly, the batteries were flat. And finally the receiver passed away ... the frustration was terrible !!
With new school, friends changed and were totally disinterested of RC stuff . My Bigwig slept on a dusty shelf.
I continued my interest in RC each decade, by buying Rc magazines. In 2006, I had a serious big crush on the Dark Impact. But my ex wife was totally against this plan ('what would you do with this toy ?' ... Blabla ...).
And Finally, in 2015 (a bad year for French people), I realized that my midlife is here and life in general is fragile : I simply buy a Dark Impact ! With full hop ups, it became a shelf queen ... so I bought other Tamiya cars :-) ...
By the way, my original Bigwig is still with me : unusable, with a lot of cracks, but still here !