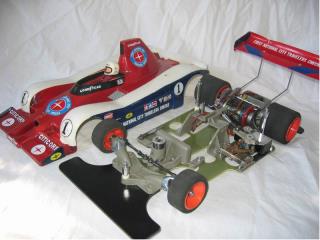 Started RC back in the late '70's at the age of 12-ish. First with radiocontrolled boats. Started in local club with electrically powered speedboats and some scalmodels. Soon after that, early '80's started cars. The first car was the Ralt Hart; bought in the LHS for a mere €35,- :-0

We used to race these ina group of 5-6 on local parkinglots; super-fun. We always went back to the LHS for spareparts; we trashed the cars. At the end a skateboard-track ruined the cars !

In the early '90 I bought a Grasshopper II. Which triggered the tamiay-virus again! At my 37th (yep) birthday I bought the re-release XR311. Was looking for some color schemes and found 'tamiyaclub.com'; a sort of paradise and cure for now I'm definitally addicted !