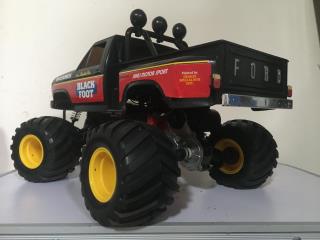 Born in the 70's, my interest in Radio Control cars sparked during the 80's in my teens. My first ever RC buggy came as a Christmas present one year when I was maybe around 10 years old - it was a red Schuco Speed Buggy which my parents bought from Redgates in Sheffield. It had 3 gears which were selected on the back of the buggy and also had working lights operated from the radio handset - super cool. I didn't know at the time, but looking back now, I realise it was based on the same vehicle as Tamiya's XR311.

Further inspiration came a few years later from a friend - one day he came out running a buggy up and down the road, on and off the pavement, it was faster than my Speed Buggy - it turned out to be a Tamiya Holiday Buggy!

It got me hooked but it would be a while before my parents could afford to buy me my first Tamiya. I made do going into Beatties model shops, looking at the display models and gazing endlessly up at the monitor which showed Tamiya's promo videos on constant loop. The one thing I could afford in those days was the Tamiya RC catalogue and guide book - I collected these religiously and would spend hours pouring over the pages.

Then one year for my birthday, my dad took me to our local model shop to choose a RC kit and I came away with The Fox! It was so fun to build and run but after a couple of years I traded it for a Blackfoot - those massive wheels (big at the time) and that pick-up body - this was more my thing really and cemented my interest in the hobby for good.

As a teenager I had time but not much money - now 25+ years later I have some money but no time lol. Anyway, I'm thankful I can re-live my RC youth, and thanks to eBay and social media, I can get to enjoy some of the models I could only dream of as a kid. My collection consists of the models that I had in the early years along with those I never had back in the day but inspired me so much. Over the years, I've been buying the odd kit here and there and now as a result, I have a few NIBs waiting to be built, a few in various states of build and a few restorations to do. All my models are built or restored to be runners, so they all have electrics and radio gear fitted so I can run them whenever.

In 2019, nostalgia got the better of me and I decided I'd like to have an original Blackfoot again (wishing that I'd never got rid of minne all those years ago). After searching around, I bought an original example in good condition, and then another lol, so now I have two! Since then I've continued collecting and bought an original Wild Willy, an original Fox, a TXT-1, an Agrios TXT-2 and last but not least, a fantastic original Sand Scorcher which come from TC's own Rallyebaz. Other models include the Clodbuster, Juggernaut 1 & 2, re-re Bruiser, re-re Fighting Buggy, Wild Willy 2 and XB Pajero Rally.

After years of enjoying the TC site, I've finally become a member and subscribed! I don't have much spare time but when I get the chance, I'll start adding to my showroom - I've got a few non Tamiya's as well, hopefully I'll get around to adding those too.

Cheers and thanks for reading!