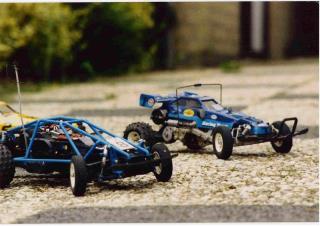 Started in 87 with a Marui, Galaxy. Gearing was worn within 3 months. I got an offer for an old frog with oil shocks in the front. Belonged to one of the kids in the neighbourhood who got it from a Dutch Championship Driver. The Frog was all ball raced and stuff, but ran not that good. After that I bought a BigWig at a discount store. I bought it for aprox US$ 70,- NIB! After that I entered one race and stopped because I lost interest. Now I'm in my 30's and picking it up again.
In 2004 I bought the Subaru Impreza WRC 2001 (58273) and loved building it and now I'm (again) anoying my neighbours on those sunday mornings!!