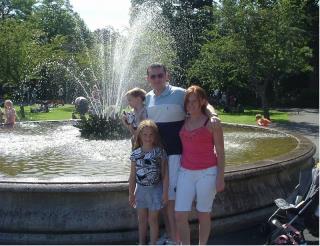 Me My first Tamiya was a Tiger stripe Escort Cosworth that I got for Christmas in 1991. I was 13 years old. That car took such a battering I think I still have the shell in the back of my nans shed somewhere ( minus the front end). I then go a Lunchbox then some other TA02 chassis.

I remember setting up courses in the back garden and driving round them for hours.

I then started racing in 1995 with a Kyosho lazer. Then in my second year of racing I used the Schumacher cat. I was not really into my buggies so I took a TA02 to my local indoor track and a few friends followed . So by the end of the year we had a full grid of Tamiya touring cars.
Shortly after I turned 17 I got my first 1.1 car so I retired from racing.

Then in 2001 now having a child and could no longer go out and have a social life I got back into using my r/c cars. Just in the street though.

In 2004 I found eBay and started buying and selling and my collection started to grow Slowly at first.

Then I discovered this awesome site and met biggus and he told me about a club not to far away from me that he raced at. So I went down for a look and got the bug again. Now I race a Schumacher MI3 on a Tuesday and my b4 buggy on a Friday. My daughter ( Chloe) now 8 races her mardave or TT01.

I also have a son Harvey who is 3 and adores r/c cars. (He has a few himself.) He is currently in training to be the next world champion and he thinks that he is Herbie.