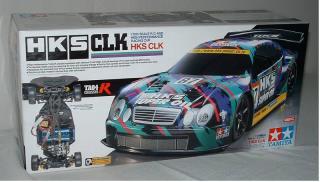 Hi there folks,
I'm not really collecting cars but am enjoying the cars Tamiya has made over the past 28 years. That's the time I'm envolved in riding those lovely cars. I started out with the Fast Attack vehicle back in '84 together with my brother to reduce the cost in driving a car like that which is different than the standard boxed car you could buy.
Later on I got The Hornet, The Hotshot, Blackfoot, Mercedes Benz C11, Sonic Fighter, The Vanquish, Top Force and the Mitsubishi Pajero Metal Top wide. Due to lack of time I quit riding the cars but last summer (2003) I picked it up again and bought a HPI Pro3 which I hopped up but I still miss the fun I had building Tamiya cars so now I'm getting the CLK HKS with the Ta-04-R (box no.58291) chassis.

I also want to rebuild my Vanquish car as I used it for racing one time as a guest and won 1st prize.

Update:05-2010
Now I finally joined the club and acquirred in the meanwhile some other cars, like the Nissan Silvia Coppermix (TT-01), Durga, BMW M3, Buggy Champ & the sand scorcher Re-re, Toyota Thundra, Avante 2011. All still NIB.