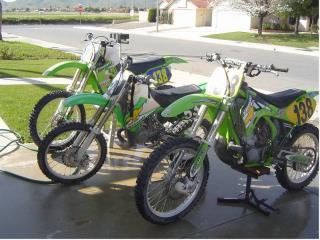 My obsession with Tamiya started when I was about 11 and had a very well used Monster Beetle given to me by my best friend, Mike. It needed alot of miscellaneous parts and hardware. After bugging my Dad enough, I'd get him to take me to the local hobby shop and get the parts I needed to get it running. It took quite a few weeks (maybe months) but I finally got it running. I was so excited to finally have a REAL R/C car. One that you could actually buy replacement parts for.
I still have that Monster Beetle to this day. Although it has been retired in favor of a restoration.
In May of 2002 my childhood friend Mike was diagnosed with Multiple Sclerosis. He had a very rapid version of this disease and lost his battle with MS on April 13, 2006. He was 25 years old. I owe all my love for R/C to him for giving that Monster Beetle to me all those years ago.
I recently aquired his R/C collection from his Father. He never was as nuts with it as I am, but I now have a Kyosho Turbo Optima in need of restoration. I will dedicate this car to Mike as it was HIS first R/C.
I was bitten by the collecting bug after finding this site in 2004, and now I currently have 19 NIB models. My favorite being an original Clod Buster with Chevrolet emblems!
I also have a few new builts and runners.
After being able to look at my NIB's for only so long (and not bringing myself to open any), my latest venture in this great hobby has been building / restoring trucks & buggies with period correct modifications.
I see no end to this habit of mine and I look foward to meeting other friendly Tamiya enthusiasts!
NICK