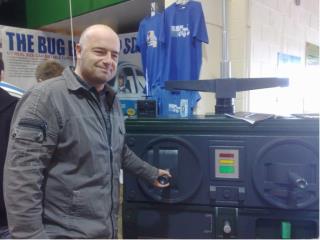 Well basically I am one of the old school good old boys who was around at the conception of this site. I have been into RC cars since the age of 10 and my first car was a used Sand Scorcher purchased from my local hobby store, Sussex Model Centre. I went on a bit of a buying spree in the early 2000's and had about 150 models in various states of repair. I have also been a keen electric RC racer and always steered towards the Tamiya brand even when they were not too competitive. I was fortunate enough to do well in the Tamiya Eurocup representing GB in the stock class at the European finals twice. Too much beer and some damn quick German kids in resulted in pretty mediocre low A final finishes. In 2006 my good friend Marcus 'Q Ball' Askell won the Ticket to Japan and I went as his mechanic and spiritual advisor. Something seemed to work and he became 2006 Tamiya World Champion. Most of his victory could be acredited to me for dropproppropping his motor and being an all round great mate and not his stunning driving. Rules changes in 2007 allowed me to win a ticket to Japan to represent GB at the World Finals in Shizuoka. After a poor start in qualifying (too much beer/saki) I managed to slot myself in the bottom of the A. I managed to drive the three races of my life and managed a 4th overall, not too shabby!

Still paying off the credit card bills from two trips to Akihabara in Tokyo hence the sale of most of my cars and current lack of enthusiasm!